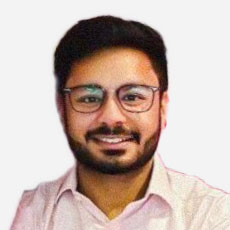 
BiographyHardik is a part of Zomato's coveted Global Growth team and is currently leading the Zomatos E-Commerce business for Philippines. Before this, he was the head of expansion of Zomato Gold, which is now the world's leading F&B membership club with 1.3 Million+ paid members. He launched Zomato Gold in Indonesia, Philippines, New Zealand and 10+ Indian cities He has been credited with designing the playbook for new geography launches and has been touted as the go-to person for expansion-strategy.

He is deeply passionate for the consumer-internet domain as founded a fin-tech startup, Connaizen early in his career. The startup went on to raise funding from the likes of Govt. of India, ICICI ventures, Startup Bootcamp Singapore and eventually got acquired by India's decacorn, PayTm. Hardik holds an MBA degree from the prestigious Indian School of Business, Hyderabad where he graduated with Dean's merit list and majored in Strategy & Marketing.