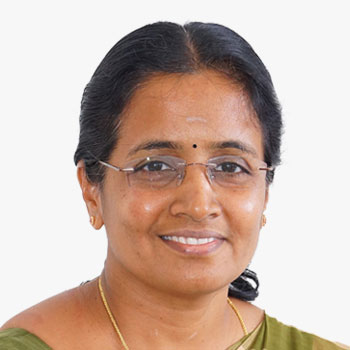 Parthasarathy Subashini received a B.Sc. (Mathematics) degree from Bharathiar University, TamilNadu, India in 1990 and M.CA degree from the same in 1993. She has also received qualified degree of M.Phil. and Ph.D. respectively in Computer Science in year 1998 and 2009 from Avinashilingam University for Women, Tamil Nadu, India. She has also obtained M.Sc. (Applied Psychology) from Bharathiar University, Coimbatore during 2022. From 1994, She is working as a Professor in the Computer Science Department of Avinashilingam University. Professor Subashini's research has spanned a large number of disciplines like Image analysis, Pattern recognition, Neural networks, and Computational Intelligence. Concurrently, she contributed to several fields of mathematics, especially Nature inspired computing. She has authored or co-authored 8 Books, 7 Book chapters, 1 Monograph, 165 papers, including IEEE, Springer's in various international, national journals and conferences. In course of her research and teaching, Professor Subashini has mentored over a hundred of post graduate students and guiding several doctoral students. She has held positions as reviewer, chairpersons for different peer reviewed journals. Under her supervision, she has ten research projects of worth more than 5 crores from various funding agencies like Defence Research and Development Organization, Department of Science and Technology, SERB and University Grants Commission. She has visited many countries like Singapore, Malaysia, Dubai, France, Switzerland, Italy, Canada, Germany, Spain, Czech Republic, Rome, Morocco, United States of America and China for various knowledge sharing events. As a member of IEEE, IEEE Computational Intelligence Society and IEEE Computer Society of India, she extended her contribution as IEEE Chair for Women in Computing under IEEE Computer Society of India Council in the year 2015-2016. She has established active international teams with University of Wyoming, USA and University HASSAN II Casablanca, Morocco by executing MoU with these 2 Universities. She is the Co-ordinator for 'Centre for Machine Learning and Intelligence' funded by Department of Science and Technology, Govt. of India. She is also an active Research Consultant for few Institutions. To add up her credit, recently she has contributed a Nature Inspired Optimization algorithm called 'Synergistic Fibroblast Optimization(SFO)'. The codes and published articles are publicly available for the perusal of the Research community in MATLAB central, Researchgate and Adademia.edu. She has also 3 patents at her credit.