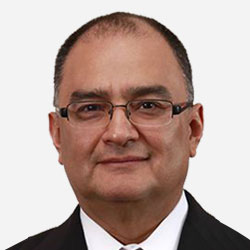 Between 1984 to 1989 he worked in the National Institute of Statistics and Geography (INEGI), later on again in 1994 performs the role of Coordinator of Methodologies, Analysis and Procedures.

From August 2013 to December 2017, he chaired the United Nations Regional Committee on Geospatial Information Management for the Americas (UN-GGIM: Americas), and was Co-chair of UN-GGIM Global 2016 and 2017.

Member of the IAOS executive committee. He was a representative of IAOS before the Scientific Programming Committee (SPC) of the ISC WSC in 2015, 2017 and 2019.

Currently since August 2019 is Chief/Director of the Statistics Division of the Economic Commission for Latin America and the Caribbean (ECLAC).