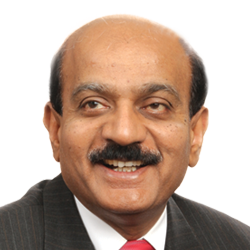 BiographyAs Executive Chairman, BVR Mohan Reddy focuses on the long-term future of the company. He is involved in leadership development, innovation, and corporate social responsibility. Mohan Reddy founded Cyient in 1991, with the vision of providing engineering services to global markets. Since then, he has established the Engineered in India brand, providing design engineering services to global industry leaders. He is also credited with pioneering the Computer-aided Design/Computer-aided Manufacturing (CAD/CAM) culture in India, introducing computer systems for design and manufacturing applications, as far back as 1982. He served as the Chairman of NASSCOM (National Association of Software & Service Companies) from 2015 to 2016, as Vice Chairman between 2014 and 2015, and as a member of the Executive Council, since 2003. He has also served as the Chairman of the Confederation of Indian Industry (CII), Southern Region between 2008 and 2009. He is associated with the councils of various academic and industrial forums and has led several initiatives benefitting industrial companies. He was appointed Director on the Board of National Skill Development Corporation (NSDC), and Member of Court of Governors of Administrative Staff College of India (ASCI).AbstractDigital Engineering The new growth engine for AEC Market