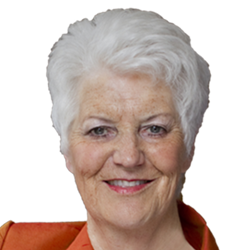 BiographyMrs Sybilla Dekker has a background in organisation management and public administration. She holds several supervisory and administrative positions. Mrs Dekker was minister of Housing, Spatial Planning and the Environment in the Netherlands in the Cabinet of Balkenende II and III (2003 2006).

Prior to becoming a minister, she held senior management positions in the public and private sector. She also held positions in the supervisory boards of Heineken Netherlands, Rabobank, LUMC and NS. After being a minister, mrs Dekker was chair of Talent to the Top, a foundation promoting inclusiveness and diversity at the top. She also presided the Dutch Charity Platform. She was a member of the supervisory board of BNG Bank and Royal Haskoning DHV and held a chairing position in the supervisory board of Kadaster. Representing the Netherlands, mrs Dekker was, until recently, a member of the College of Financial
Supervision of Curacao, St Maarten, the BES Islands and Aruba.

Currently Sybilla Dekker holds several key positions in the National Public Transport Group, Maasvlakte II and the supervisory board of Kadaster Bonaire (on behalf of the minister of Infrastructure and Water). She is a member of the advisory board of Atria, the institute on gender equality and womens history in the Netherlands. Since June 2018 mrs Dekker has been appointed Minister of State.