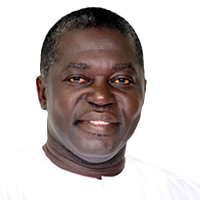 
BiographyDeputy Minister of Lands and Natural Resources and responsible for Lands and Forestry.

He is the Member of Parliament for Atwima Nwabiagya North in the Ashanti region of Ghana a seat he has held from January 2005 to date.

He is 50 years old and a native of Akropong in the Ashanti region.

He holds a BSc(Hons) Degree in Land Economy from the Kwame Nkrumah University of Science and Technology, Kumasi, Ghana.

He also holds and MSc. Degree in Hospitality from Birmingham, United Kingdom.

He was a Ranking Memer of the Lands and Forestry Committee of Parliament (2013  2016) and became Chairman of the Committee in 2017 before his Appointment as Deputy Minister.