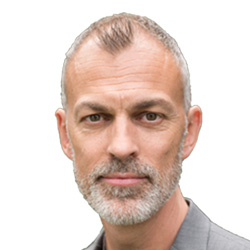 
BiographyGeo Data Strategist at City Planning Authority, City of Gothenburg and chairman of Geoforum Sverige
Graduated in 1997 with a Master of Science in Earth Science and GIS.

One of the leading Geo Data specialists in Sweden in areas of Geo Data, Smart Cities, Digital Twins, GIS-analysis and 3D-GIS.

Eric Jeansson has a professional background of 10 years as a GIS analyst in the technical consulting industry as project leader in GI application development and GIS analysis (including work focused on adapting Multicriteria decision for location analysis) and additionally 10 years as GIS manager and Geo Data strategist in the City of Gothenburg.

As a Geo Data strategist In City of Gothenburg he is responsible for making Gothenburg a Smart and sustainable city by using geo data. He is responsible for the development of new techniques for visualization and citizen dialogue, like the world unique My City portal (minstad.goteborg.se). He has also, as the first municipality in Sweden, introduced procedural modeling, City Information Modeling and the concept of Digital Twins in the urban planning process.

Eric Jeansson is also chairman of Geoforum Sverige, a national organisation promoting benefits of using geo data in the society. AbstractJust in time for the 400 years anniversary of the city of Gothenburg in 2021, a digital twin will emerge; Virtual Gothenburg. The virtual environment will be created as a parametric model of the city, linking information about the physical environment and social/environmental data. The digital twin will be used for scenario analyses regarding urban planning, for citizen dialogues about city development and as a test bed for future innovation for the benefit of all actors within the city.