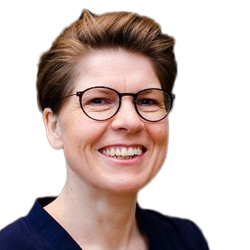 BiographyJette works as smart city coordinator and project developer in Vejle Municipality. Her job is to bring new solutions in place in the organization and push the digital agenda.

She is the project manager on the VR-cave, a 1:1 studio where Vejle displays a digital 3D model of the city of Vejle. The VR-cave is one of the tools to display future projects and to have a fruitful dialogue with politicians and citizens. Vejle Municipality is currently working on the collection and structure of different data sets with the aim of being able to make data driven decisions for a better city. AbstractThe city of Vejle has installed a 1:1 virtual reality cave in their city lab to display and debate future projects in the city. A realistic model of buildings and plans is much easier to understand for non-architects. The dialogue is equal when all participants are able to get the same picture of the future.

Review of future buildings and urban spaces can be done in more detail and errors can be found in time so expensive extra costs can be avoided.

The content shown in the virtual reality cave compiles GIS-data, 3D city model with BIM-models from proposed new buildings. Visitors can examine data at their own pace by using the x-box controller provided. The model is open to the public all days, 10 month a year.