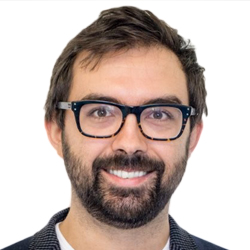 BiographyDr. Jernej Vidmar finished his masters in architecture in 2008. After that he worked with prof. Janez Ko'elj, city architect of Municipality of Ljubljana (European green capital 2016). In 2016 Jernej finished his PhD in urban design on topic of Interactive regulation of built form. In 2017 he and his 3 partners co-founded startup AgiliCity, a legal entity behind Modelur. He is product manager and CEO. AbstractWe have developed a new urban design method named Interactive 3D Zoning and related parametric software application named Modelur.

Interactive 3D Zoning is a novel urban design method that embodies urban planning/zoning rules in a way that automatically adapts buildings to local zoning rules during the early stage of conceptual urban design/massing. At the same time, the application warns you about mistakes (eg. when Floor Space Index is too high or when Buildings are placed too close together) and calculates all key urban parameters (eg. Gross Floor Area, required Parking Spaces). All this is achieved by transferring zoning rules and land use parameters directly into Modelur, which takes care of calculating numbers and adapting the buildings.

During the early research, we have proved that new method enables on average much faster (2,4 times) and precise (4,6 times lower coefficient of variation in reaching the target FSI) 3D design of the development. It also reduces both, the number of mistakes (3,5 times less) as well as their variance (2,2 times less), which are due to improper placement of the buildings within the area. We believe that today, when the application is even more developed, results are even better.