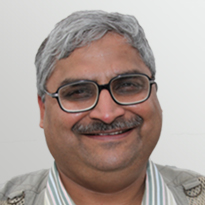 BiographyPallava Bagla (55) is a charismatic science communicator respected for his deep understanding of Indian S&T system. He has won many national and international awards for his work. Explaining complexities of science in a simple language is his forte. He has extensively covered India's space program.

His pioneering work show casing Indias maiden mission to Mars and Moon has been applauded this aired in English and Hindi for New Delhi Television. In his two decades of writing for the prestigious American weekly Science, his stories have highlighted India to the world.

He was won three national awards for his science writing and he runs a daily photo blog on Twitter titled `Enjoy Nature and has authored several books.

He has won three national awards for excellence in journalism the last at the hands of Prime Minister Narendra Modi. In 2010, he was awarded the `David Perlman Award for Excellence in Science Journalism given by the American Geophysical Union, Washington DC, considered the `Oscar for Science journalism for his landmark writings which exposed the Himalayan glacier blunder by the UNs Intergovernmental Panel on Climate Change (IPCC).

He served as President of the International Science Writers Association and was a member of the Executive Board of the World Federation of Science Journalists.