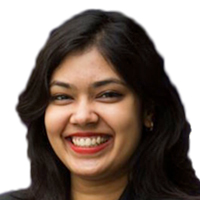 BiographyVaishali Neotia is an engineer, entrepreneur, speaker and revolutionist. She is also the cofounder and CEO of Merxius, a company that solves real world business problems using Extended Reality (Augmented,Virtual,Mixed). Its flagship product is an Extended Reality Authoring Software RED aimed at non coders.

Merxius has been featured across media for its ground breaking work, including The Hindu, Deccan Chronicle, TOI, Saakshi, Eenadu, Hans, Telangana Today, The Week, Vogue, CNBC among others.

She was selected for a mentorship program conducted by the US State Department with Fortune 500 companies where she was mentored by Ms Dina Powell, currently the deputy national security advisor to U.S President Trump for Strategy.

Vaishali has been a TEDx speaker and also speaks at various conferences and educational institutions on technology, innovation, augmented and virtual reality, entrepreneurship and feminism. She was recently invited to represent India at a conference held in Nepal, on changing the business climate of South & Central Asia for women.

She is a mentor for various initiatives including Girls in Tech, US Exchange Programs, Sheroes and Startup Leadership. She is a board member of the GS-ISB- 10000 women alumni and president of the Hyderabad chapter. She has previously chaired the Women in Engineering committee at VLSID, been a committee member at Grace Hopper conference and HYSEA SME, and is a member of Fortune Most powerful women, Vital Voices, U.S Exchange alumni, 10,000 Women, Startup Leadership, COWE, ALEI , Nasscom Women in Tech and Weconnect International networks.