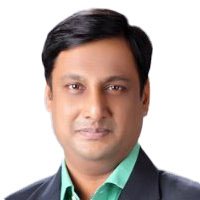 BiographySunil David has 23 years of experience in the IT and Telecom industry. Sunil is currently the Regional Director ( IOT ) for AT&T India based in Chennai. . Sunil is responsible for building and executing the IOT strategy for the India and the ASEAN regions , working on building a partner ecosystem for AT&T in the area of IOT devices, platforms and applications and on working on a number of Marketing initiatives to help build the AT&T brand in the IOT space.

Apart from his responsibilities with AT&T , Sunil is part of the FICCI TN Tech Panel that is working towards evangelizing the use of Digital technologies within multiple industry verticals within TN. Sunil is also part of the CII TN Manufacturing panel working on initiatives around trying to get manufacturing companies in TN to be Industry 4.0 compliant. Sunil has been recently inducted into the IET IOT India panel , Telecom Working Group whose charter is multifold - to work with Academia to promote IOT and have curriculum that covers IOT, liaise with Govt bodies to create IOT awareness and support in policy creation , gather and mentor startups in the IOT space and participate in local conferences where relevance of IOT can be presented and awareness created.

Sunil is also in the Advisory board of a Start up based in Chennai that is focused on Skills development and Cyber security training and consulting.

Sunil is also part of the NASSCOM Diversity and Inclusion Council, Chennai chapter working on various initiatives to bring a greater awareness among Corporate India to build an Inclusive and Diverse workforce.

Sunil had a brief stint with Telstra from Nov 2015 to Dec 2016 for a little over a year as their Country Sales Director responsible to grow the Enterprise business in India . Sunil was also part of the Telstra Senior leadership team. Prior to joining Telstra , Sunil had his first stint with AT&T Global Network Services India for 14 years. In his last role with AT&T as their Regional Sales Head for part of the Southern region based out of Chennai , his region grew to be the largest revenue contributors for AT&T India in the Enterprise Segment.

Sunil has a Bachelors in Electronics and Communications Engineering from Bharathiar University, Coimbatore and a Masters Diploma in Business Administration from Symbiosis Institute of Management studies , Pune. He is currently based out of Chennai and lives with his wife and his son.

Sunil has spoken at a number of industry forums in the past including the Industrial IOT Congress organized by Entraine in Mumbai in April 2016, spoke at the Indo Australian Chamber of Commerce IT Summit in Sep 2016 , Invited to be part of a Leadership roundtable discussion at the Telecom Leadership Forum organized by Cyber Media in Delhi in Dec 2016 ( shared his views on Digital Transformation ).

More recently Sunil had given the Executive keynote address at the IOT Innovation conclave in Bangalore in August 2017 organized by Konnect Worldwide . Also recently invited by Frost and Sullivan , Chennai to share his views at the Growth Innovation Leadership council Breakfast session on the topic   Industrial IOT  Beyond the Hype  . Sunil was also a panelist on the session SME-CXO meet track at the IOT India Congress 2017 held in Bangalore on 14th and 15th September. Sunil also was recently invited to Pune to address IOT startups at the Startup Master Class event organized by IIT Kanpur Pune Alumni association to speak on the topic  IIOT  Opportunities and Challenges . The CM of Goa , Mr Manohar Parikkar was the Guest of Honour. Sunil was also invited to speak the AIR Summit in Hyderabad on 10th October to speak on the topic of  Disruptive Power of IOT and its impact on Businesses  and on 13th October , CII invited Sunil to be a panelist on a discussion on SMART Manufacturing in India.